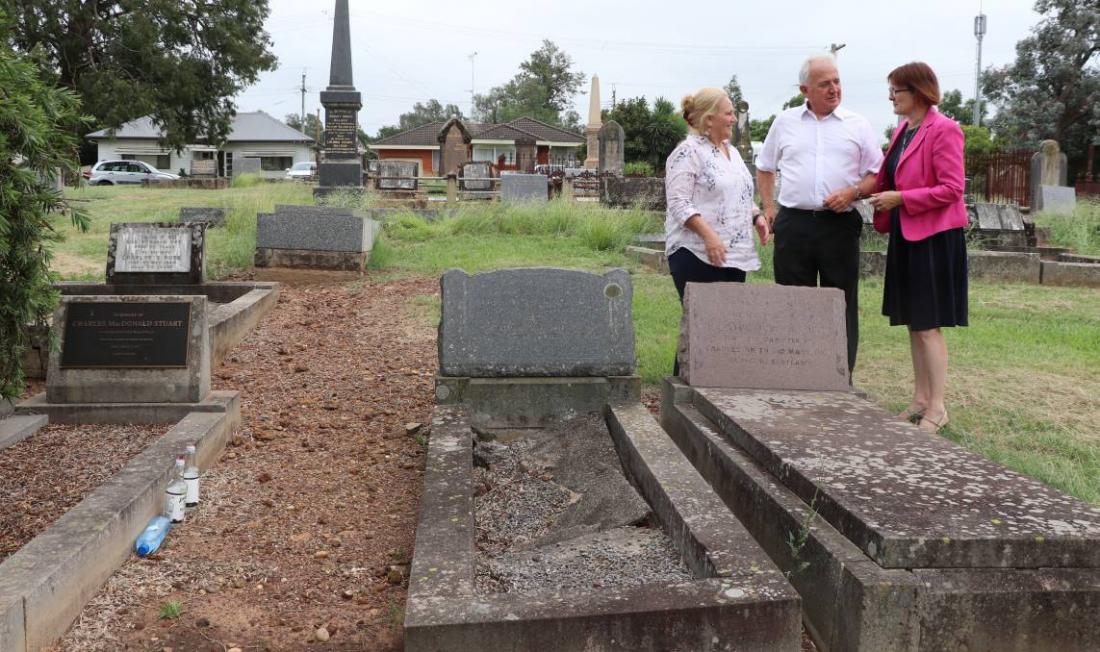 According to biographer Alan Leek, the Victoria Cross and George Cross Association in London are interested in assisting with the planned memorial for the Hawkesbury resident.

Mr Leek has been working with the Hawkesbury Historical Society, Deputy Mayor Mary Lyons-Buckett and Macquarie MP Susan Templeman, to construct the memorial.

Ms Templeman – who launched Mr Leek’s book Frederick Whirlpool VC: Australia’s Hidden Victoria Cross in 2018 – said it “seemed ridiculous” there there was no marker to honour Mr Whirpool’s efforts in the Hawkesbury.

“When I learned he was buried only a kilometre from my office, I was even more determined to help give the first man to receive his VC in Australian uniform the recognition he deserves,” Ms Templeman said.

“I have sought help from the Australian War Memorial’s Brendan Nelson, who has charge of the Medal, to do this.”
Mr Leek said the Windsor and Richmond Gazette of June 24, 1899 – the precursor to today’s Hawkesbury Gazette – first alerted the public to the mysterious life of Frederick Whirlpool, ‘an eccentric old gentleman’ who had died at his hut in McGraths Hill, just short of his 68th birthday.

“Whirlpool was more widely known by his birth-name, Humphrey James, although there remained some doubt about its authenticity too. He had been a teacher at Lower Macdonald for a while, before teaching at Pitt Town. Overlooked for a position in the National School system, he became a recluse at nearby North Rocks, until moving to McGraths Hill and under the watchful eye of his protector, local merchant, John Dick Smith,” Mr Leek said.

“It was Smith who tested our collective memory by sowing a seed of information that has puzzled researchers for well over a century. He told the Gazette that Humphrey James was also known as Frederick Whirlpool and he had been awarded the Victoria Cross for his gallantry during the Indian Mutiny.

“The VC was awarded to Private Whirlpool in Victoria on 20th June, 1861, before a crowd of 14,000 people. It was the first VC pinned to a man in an Australian uniform. Whirlpool wore it that day, but never again. The public adulation unsettled him and he disappeared into frontier Tasmania, before coming to New South Wales, where he lived the latter half of his life in the Hawkesbury. He died in 1899 and was buried at the Presbyterian cemetery, Windsor on a cold, wet winter morning, John Dick Smith was the only mourner present. No headstone was ever placed to mark his grave.”

According to Mr Leek, recent research has revealed much about this man and the deeds that earned him the Commonwealth’s highest honour.

“It also revealed his struggles with his past and his service. He believed he was destined for eternal damnation,” he said.

“Whirlpool would shy from the honour of being memorialised in the Hawkesbury, but his Victoria Cross is honoured in the Hall of Valour in Canberra. He is also honoured in Liverpool, England, who claim him as a son. The falsehood of his name was enlarged by his claim to have been born there. He was born in County Carlow and raised in Dundalk, County Louth.”

Mr Leek has formed a local committee for the purpose of facilitating the placement of the Whirlpool VC monument and said “work is well under way to achieve it”.

“The Victoria Cross and George Cross Association in London has expressed an interest in supporting the project. The Queen is patron and Prince Charles, its president. British authorities have also promised support,” he said.

This article originally appeared in the Hawkesbury Gazette as Support growing for recognition of Australia’s first Victoria Cross recipient, Frederick Whirlpool, and his South Windsor grave