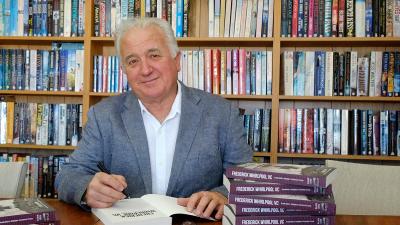 You’ve had quite an interesting life before you became an author; tell us a bit about that.

I worked in the wool as a rouseabout when I dropped out of high school and learnt to swear like a shearer – a talent I still find useful at appropriate times. I went on to become a police officer for over 30 years, where I saw pain and suffering and the best of human endeavour through the prism of a close observer and active participant. I worked as a detective for over half of my career, achieving the pinnacle recognition for performance, the Peter Mitchell Award. I studied at universities and the FBI National Academy in the USA. I attainted the rank of superintendent.

For almost 30 years I was founder and co-director of an exhibiting fine art gallery, mostly concurrent with my police duties, so I don’t like to be defined by one role. I assumed that undertaking the Whirlpool story would relieve me of my former police identity, not knowing that I would discover Frederick Whirlpool VC had been a member of the NSW Police Force.

Did your life experiences influence your books in any way?

Yes, definitely. I was born a few years after the end of WWII, so was very aware of not only the conflict, but the bravery and sacrifice of the men and women who served. As I have grown older, I understand that those who serve are but a microcosm of their wider world, with fears, anxieties, doubts, bad behaviours and frailties found in the greater populace. This makes courageous action all the more laudable. Look at men who have earned the Victoria Cross or women like Edith Cavell and Noor Khan, both of whom died bravely while serving.

Your book, Frederick Whirlpool VC is based on this character. Can you elaborate and tell us a bit about him?

He was an ordinary man, born Humphrey James, in 1831 in the north of Ireland. His father, also Humphrey, was one of the first constables in Ireland, the font of policing. As many young men did, he changed his name to enlist, in his case to Frederick Whirlpool, to reflect his father’s characterisation of him as having a temper like a whirlpool. He wanted to travel to exotic places and to teach. He was well educated. He became as assistant Army teacher in India, but when the mutiny erupted, he was called to arms.

In a gruelling campaign, this ordinary man showed his mettle by his actions in twice saving wounded comrades under murderous fire and a month later in saving his officer and fighting at least twelve rebels single handedly, allowing his comrades to advance. He suffered 17 dangerous sword cuts and a fractured skull.

The horrors he experienced fed his belief that he would burn in Hell, a burden he carried for the rest of his life. Many of those horrors are explored. After failing at policing, he became a teacher in NSW – and again failed. He became a recluse for almost 30 years, until his death near Windsor, in 1899.

His subterfuge, deliberately employed to hide his past, has been unfurled in my book. His Victoria Cross was presented in Victoria in 1861, the first to a man in an Australian uniform. He never wore the cross again and once his fame spread across the world, he hid it from all but one man, who left a thread for me to follow. The VC is now in the Hall of Valour at the Australian War Memorial.

What inspired you to write about him?

I fell across him accidentally while researching something entirely unrelated. I knew his resting place, but did not know of him. I was appalled that he did not have a grave marker and that it might have been vandalised, as so many police graves have been. I began to explore and found the mystery challenging and engaging. My work has filled one of the many gaps in the lives of VC recipients across the world.

Writing a book takes enormous amount of research and discipline. How did you go about acquiring all the information?

I made no assumptions and started with a clean slate. Every revelation became a joy, like discovering that his real name was Humphrey James. Others, over more than a century, had assumed that this was an assumed name. I found his home and his family in Ireland. I engaged researchers in Ireland and England to dig out detail. It was worth the effort and saved me many days stumbling through the labyrinthine British Library.

I loved the research, and I loved the writing. It has never been a burden and I have never been pressured to do it. I hoped for publication, but never expected it. The outcome has been very satisfying.

Did you face any major challenges – writers’ block perhaps?

The only challenge is the old bogey of working class self doubt about one’s ability to write. I suppose that has been answered by not only having this book published, but having another being published in Australia next year. The Killing Chronicle is a true crime account of the murders of NSW Police and others, between 1940 and 1971. I have just learned the UK rights to Whirlpool VC have been sold, and it will be published in England next year.

So there you go; 20 years on, I can’t seem to get away from policing yet. These stories need to be told. I don’t suffer writers’ block, probably because I am not writing fiction.

What’s been the most rewarding part for you?

Revealing a mystery – solving a case. It has always been rewarding. Telling his worthy story across the world is very satisfying.

What’s next in the pipeline; are there any additional books we can look forward to reading?

The Killing Chronicle comes out in August 2019 and I am working on two new works, but no promises there. There are plenty of stories to tell.

With Christmas fast approaching, books are often a perfect gift. Where can we purchase one of your books?

That’s an interesting point. I know that many people have bought my book with the intention of giving one as a Christmas gift. Some have already left for the UK, Ireland and the USA. It is available direct from www.bigskypublishing.com.au and most online retailers, like Booktopia. Being published in the UK soon makes this Australian copy a first edition, and good bookstores are stocking it too.

You’re about to have a book launch at Taree Literary Institute. How can we find out more information?

The launch of Frederick Whirlpool VC – Australia’s Hidden Victoria Cross will be held at the Institute, 129 Victoria Street, Taree at 11am on Wednesday 5th December.Phone 6552 4361 for details. I look forward to meeting people there and discussing my work and in particular, Frederick Whirlpool. Feedback is welcome on www.alanleek.com.au